The “2016 Treadmill Brand of the Year” is 3G Cardio, according to the esteemed Fit Prof.

The 3G Cardio Co., based in Phoenix, Ariz., is of course extremely proud to win such an award, but the designers get even more satisfaction from making products a lot like fitness enthusiasts would draw them up if they were in the planning room.

We put the investment in a high quality, solid functioning treadmill instead of lots of fancy bells and whistles, which drive up the price of competitors’ comparable models by $1,000s.

In a nutshell, 3G Cardio’s slogan is: “You get everything you want in a treadmill and nothing you don’t.” The emphasis is on superior function of the treadmill, not on fancy electronic “extras.”

3G Cardio, which has also earned five-star ratings from Amazon.com and many other honors, uses high-quality components such as an Ortho Flex Shock™ belt and suspension system. They are just as good as what you’d find on other treadmills that sell for thousands more. 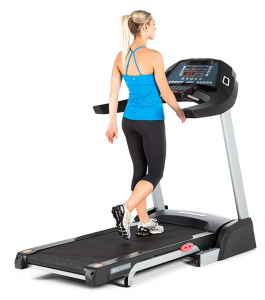 There are three award-winning treadmills to choose from to fit your exercise, budget and space needs: the 3G Cardio Elite Runner, Pro Runner and Fold Flat Treadmills.

The high-powered HP motors are the real deal, but just as importantly the high quality torque of the engines provides as smooth a run as many leading commercial treadmills. You can comfortably incline the treadmills and run at top speeds.

Horsepower of a treadmill engine is cited lots of times in evaluating treadmills, but it can be misleading because if the engine’s torque is poor you’ll feel the belt pause, slip or lag. No one wants to run on a shaky, flimsy treadmill.

When it comes to bells and whistles of the 3G Cardio Treadmills, there are more than enough built-in and custom programs to get you where you need to go.

However, if you want to increase the workout interaction and entertainment, simply upgrade with equipment you probably already own and that’s better than what will ever come standard on a treadmill.

Plug in your iPad or tablet for exercise apps, music or videos on a screen you already have that are hundreds of times better quality than any built-in treadmill screen. Or, watch the TV in your workout room rather than forking out unnecessary hundreds or even thousands more for an inferior treadmill console screen and electronics package to what you already own.