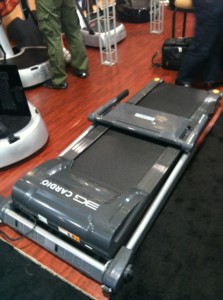 (photo courtesy Snewsnet.com) Have you ever seen a treadmill that can fold up horizontally like this for storage to just 9.75 inches and easily be rolled under a bed, or be able to be folded vertically to store in a closet or corner of a room? No one has before the 3G Cardio 80i Fold Flat Treadmill was introduced at the Las Vegas Fitness Trade Show in September. It’s the first dual folding treadmill.

LAS VEGAS — The new 3G Cardio 80i Fold Flat Treadmill was a star among stars at the 2012 Health and Fitness Expo & Business Trade Show held at the Sands Expo & Convention Center in Las Vegas Sept. 19-21.
The Phoenix-based 3G Cardio, which already has an award-winning lineup of vibration training machines, showcased the new 3G Cardio 80i Fold Flat Treadmill.
The 3G Cardio 80i Fold Flat Treadmill makes fitness history with an amazing Triple Crown of firsts in the industry:
* It’s the only dual folding treadmill on the market — meaning you can fold it vertically or horizontally when not in use. Store it upright in a closet, or fold it flat to a height of just 9.75 inches and easily roll it under a bed.
* It’s the only fold flat treadmill that’s designed to walk AND run on.
* It’s 3 horsepower motor is the biggest of any fold flat treadmill. 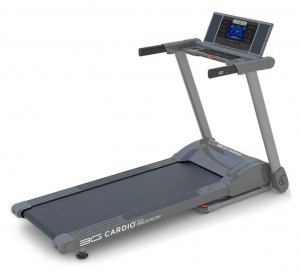 The revolutionary 3G Cardio 80i Fold Flat Treadmill, the first dual folding treadmill, retails for an MSRP of just $2,099.

The 3 horsepower motor and 225-pound frame give the 3G Cardio 80i Fold Flat Treadmill unmatched power, sturdiness and durability in the space saver class of treadmills, while the ability to fold it flat or vertically provide the most versatility ever for storage.
If you are tight on space in your residence, business, motor home or wherever else you spend a lot of time and didn’t think it was possible to have a quality treadmill, the 3G Cardio 80i Fold Flat Treadmill makes it a whole new ballgame.
It even has the capability to transform into a treadmill desk to use your laptop on while walking or running.
Snewsnet.com, which is widely respected news source for the fitness world, wrote this about the 3G Cardio 80i Fold Flat Treadmill: “3G Cardio brought its beefy fold-up treadmill (to Las Vegas), the 80i (MSRP $2,099, MAP $1,499), which has a 350-pound capacity and folds down to just 9 inches in height making it easily storable underneath a bed. The display folds down to accommodate a laptop so people can easily work while walking, though the treadmill is sturdy enough for a run. When the display isn’t folded down, the treadmill’s speed can be adjusted by a reel stat speed control that isn’t as sensitive as standard reel stats. The piece also has a 3 horsepower motor and a 15 percent maximum incline. It has built-in speakers and an MP3 input.”