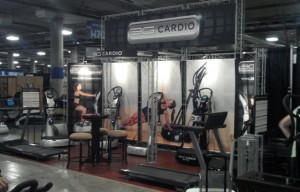 LAS VEGAS — It seemed everyone was talking about 3G Cardio at the 2012 Health and Fitness Expo & Business Trade Show held at the Sands Expo & Convention Center in Las Vegas Sept. 19-21.

The Phoenix-based 3G Cardio showcased the new 3G Cardio 80i Fold Flat Treadmill and 3G Cardio AVT 3.0 Vibration Machine, making their booth one of the most visited and talked about at the entire show.

The show was a huge commercial success for 3G Cardio, which wound up receiving commitments to have its fitness line floored on more than 50 new retail showrooms across the U.S.

Snewsnet.com, which is the inside voice of the fitness world, had this to say about the 3G Cardio 80i Fold Flat Treadmill: “3G Cardio brought its beefy fold-up treadmill, the 80i (MSRP $2,099, MAP $1,499), which has a 350-pound capacity and folds down to just 9 inches in height making it easily storable underneath a bed. The display folds down to accommodate a laptop so people can easily work while walking, though the treadmill is sturdy enough for a run. When the display isn’t folded down, the treadmill’s speed can be adjusted by a reel stat speed control that isn’t as sensitive as standard reel stats. The piece also has a 3 horsepower motor and a 15 percent maximum incline. It has built-in speakers and an MP3 input.”

The 3G Cardio 80i Fold Flat Treadmill is the only dual folding treadmill on the market — meaning you can fold it vertically or horizontally when not in use. So you can store it upright in a closet, or fold it flat to a height of just 9.75 inches and easily roll it under a bed.

The 3G Cardio 80i Fold Flat Treadmill is also designed to allow users to set up their laptop computer on it to use while walking or running.

Smaller and less expensive than the best-buy award winning 3G Cardio AVT 5.0 ($3,999 MSRP) and 6.0 Vibration Machines ($4,999), the 3.0 AVT still delivers high-end quality and power and great value compared to similar models.
With a unit weight of 200 pounds and vibration platform size of 24×24, the 3G Cardio AVT 3.0 Vibration Machine is rated for use for people weighing up to 350 pounds.

A powerful motor can produce between 25-50 hertz vibrations and the machine comes with four pre-programmed workouts.
There are adjustable hand straps and a removable dampening pad to allow even more control on just how strong the vibrations are.